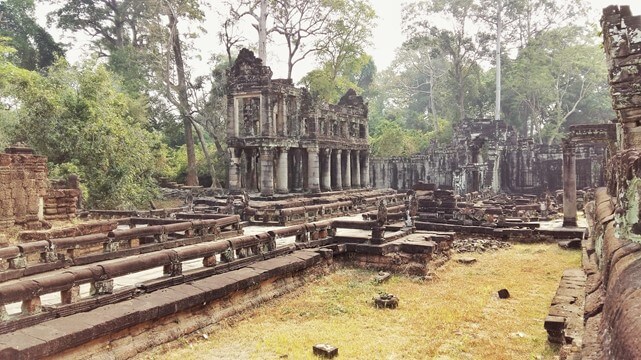 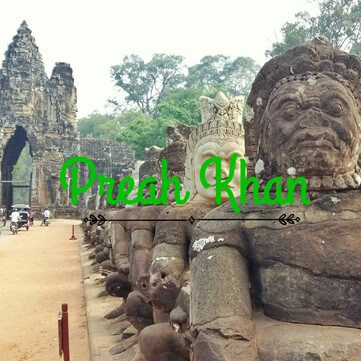 After visiting Angor Wat, we head straight to Preah Khan. It took me 10 minutes of tuk tuk ride to reach this temple from Angkor Wat. Preah Khan was built for King Jayavarman VII in the 12th century. Like other temples, Preah Khan has be left largely unrestored, with numerous trees and other vegetation growing among the ruins. Preah Khan’s complex layout reflects continual construction around its central temple area. The city’s concentric walled enclosures define four precincts aligned with four cardinal points. 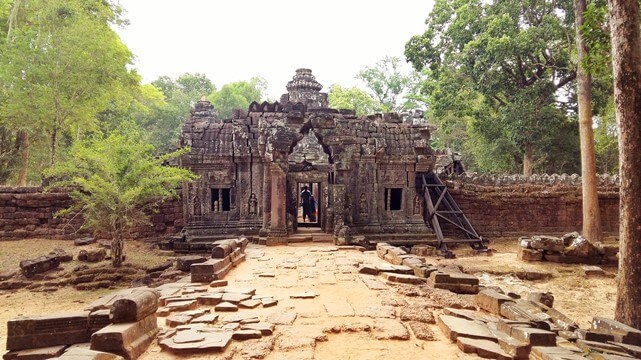 Unusually the modern name, meaning the “sacred sword”, is derived from the meaning of the original – Nagara Jayasri. The outer wall of Preah Khan is of laterite, and bears 72 garudas holding nagas, at 50m intervals. Garudas are immense half-men, half-bird of Hindu mythology vanquished the naga, and in many legends lift Preah Khan up to the heavens as a “flying city”. Surrounded by a moat, it measures 800 by 700m. 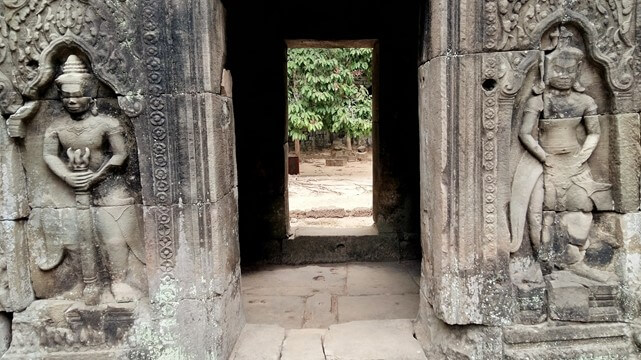 Preah Khan’s sculpture is alive with sacred symbolism. Evidence of the cosmic beliefs that shaped Khmer civilization appears throughout the site and at the other temples in Angkor. On the eastern causeway crossing the moat, devata (sculpted defenders) and asura (demons) engage in a celestial tug-of-war with a giant hooded serpent. A naga, or serpent-god symbolizes the bridge between heaven and earth, and thus appears on the balustrades of the temple causeway. 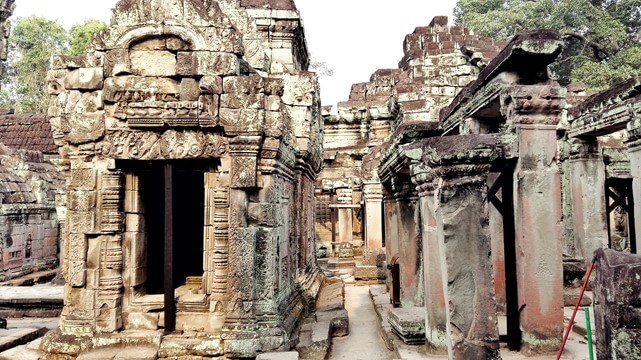 Preah Khan was originally built to be entered from the east, the traditional direction of approach for Buddhist temples. By contrast, Angkor Wat, which is dedicated to th Hindu god Vishnu, is approached from the west. 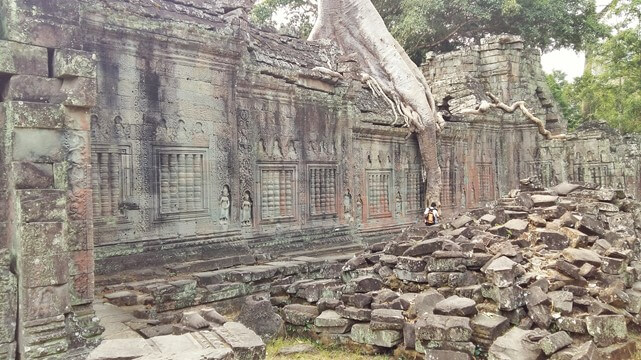 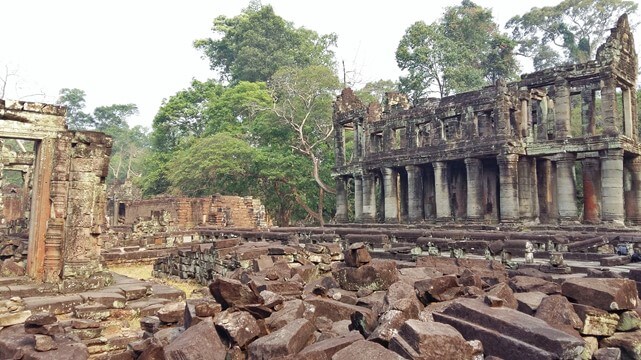 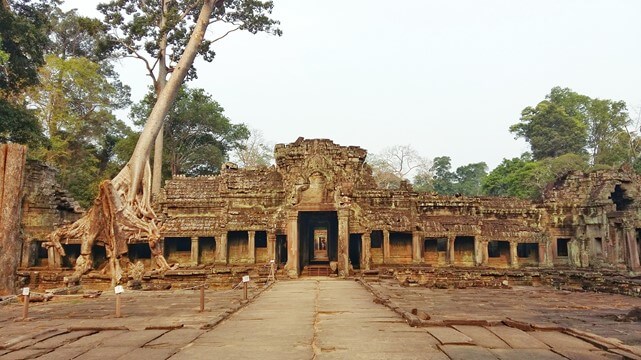 King Jayavarman VII ruled the Khmer empire at the height of its influence and power. Preah Khan exemplifies the glory of his reign and the building campaigns that helped revitalize the kingdom. Built in the 12th century, the walled city centers around a Buddhist temple dedicated to Jayavarman VII’s father, where both Buddhist and Hindu deities were venerated. Thousands of people lived within the walled city, all working to support the temple, which thrived as a center for Buddhist learning and possessed immense riches.

Although the temple is largely unrestored, they are making efforts to restore this precious Preah Khan. They have this program called Adopt-A-Garuda, where you can adopt one of 72 Garudas in the temple and raise funds for the conservation of the Garudas. To date, World Monuments Fund has raised over $500,000 to conserve these remarkable sandstone sculptures which have become symbols of their conservation work at Angkor.

For centuries patients have tried sundry herbal supplements for ED – the repeated failure to get an erection firm enough for sexual intercourse. One recent study found that ED affects 140 million men worldwide. If you’re concerned about erectile problem, you have to study about how much does levitra cost. Is it possible to prevent ED? Occasionally folk are looking for remedies to resolve sexual health problem. When you buy medicaments like Cialis you must ask your dispenser about levitra cost per pill. Several companies describe it as levitra prices. However, you should check with your doctor to see whether one of these remedies is a suitable choice for you. Additionally most side effects vary depending on the patient’s diseaseage and other factors. 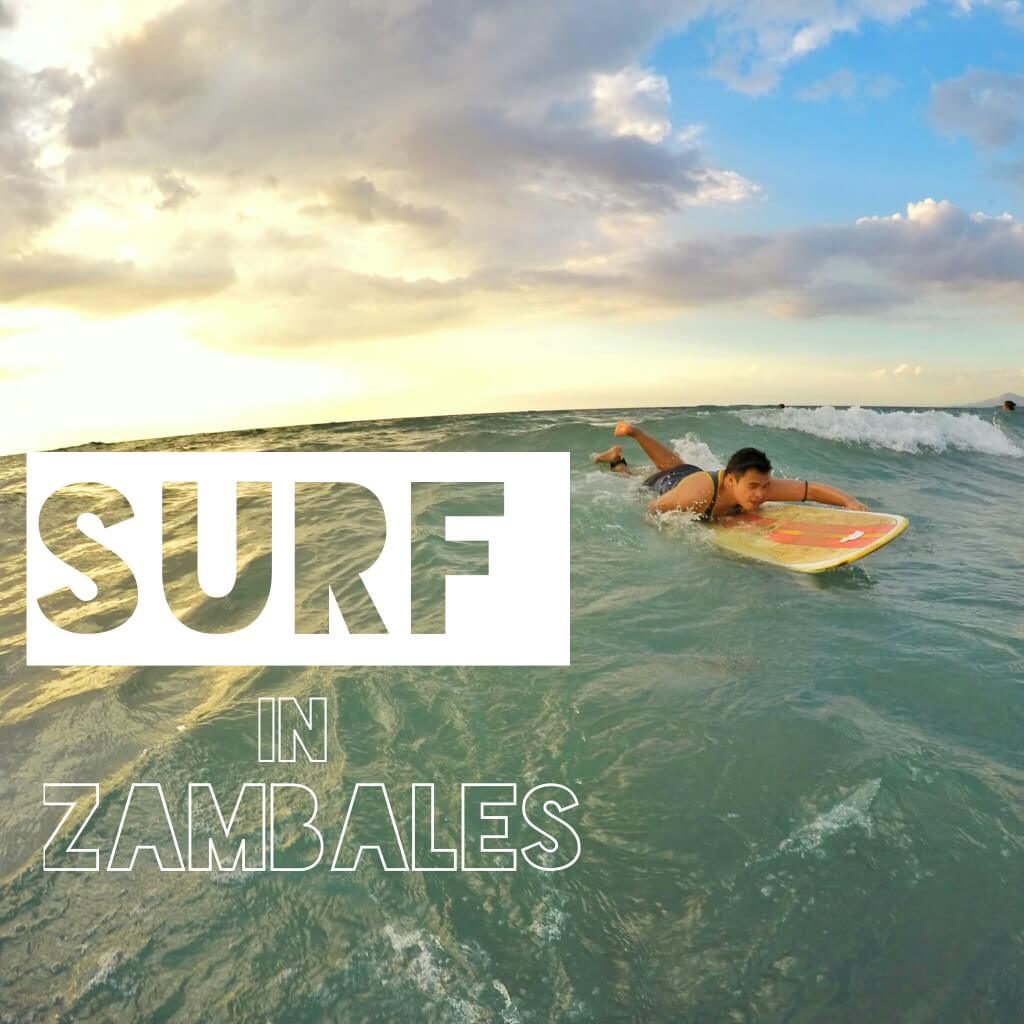 February 2, 2016 Mc Pol Comments Off on Surf in Liw-Liwa, Zambales 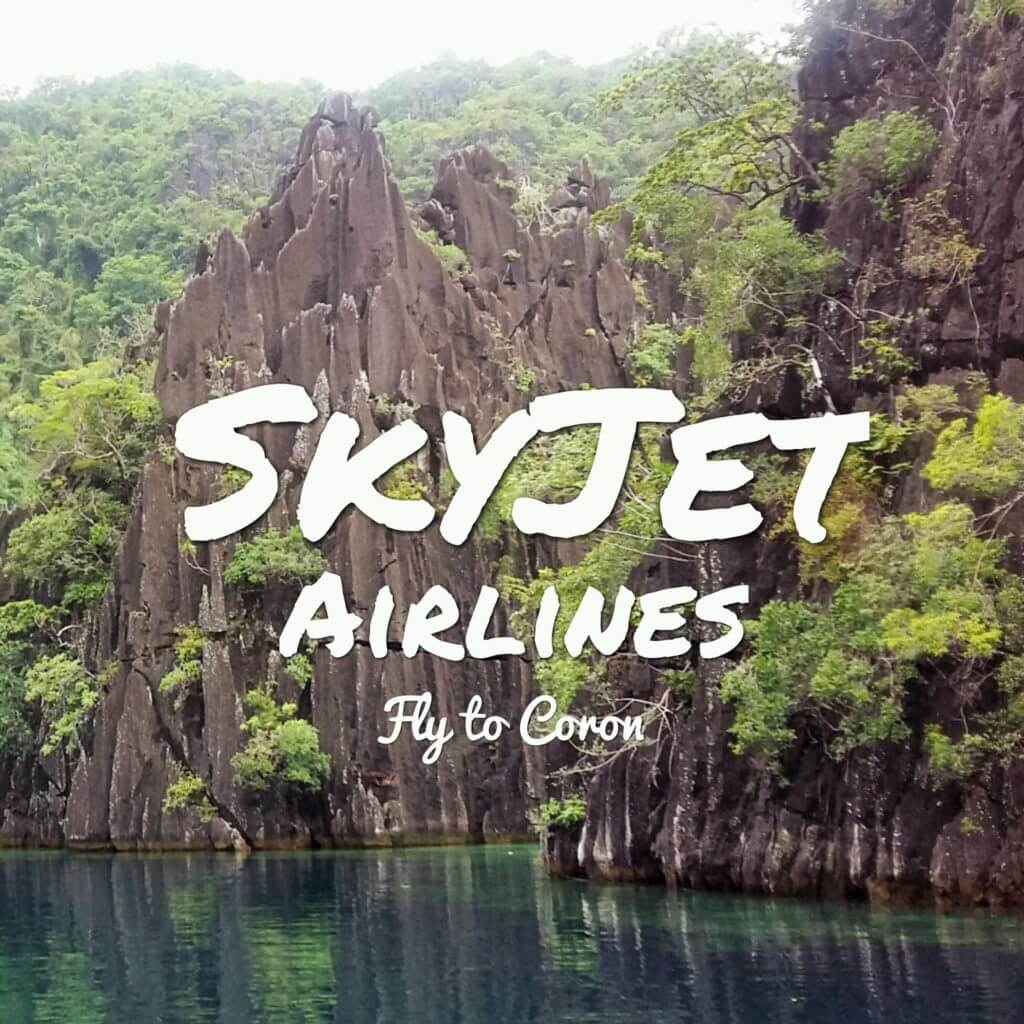 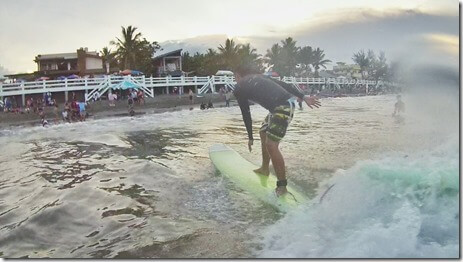 June 3, 2014 Mc Pol Comments Off on Sabang Beach | A surfing spot in Baler